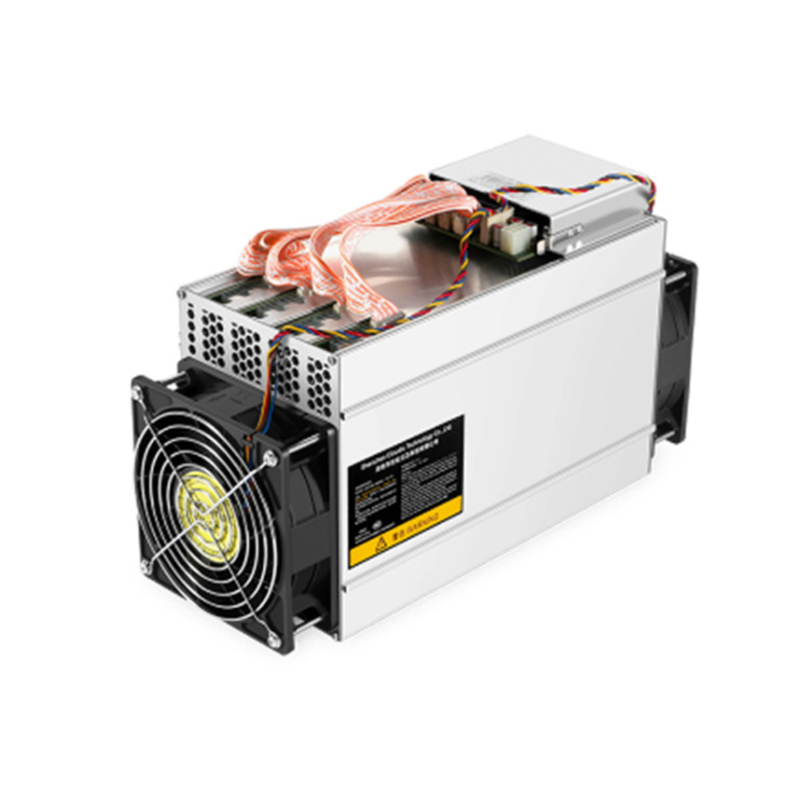 L3+ is a classic Litecoin miner from Bitmain, which can be used for all encrypted digital currencies of the scrypt algorithm. Unlike other miners, the Antminer L3+ uses dual front and rear fans, four hashrate boards, and an integrated body.


Send email to us 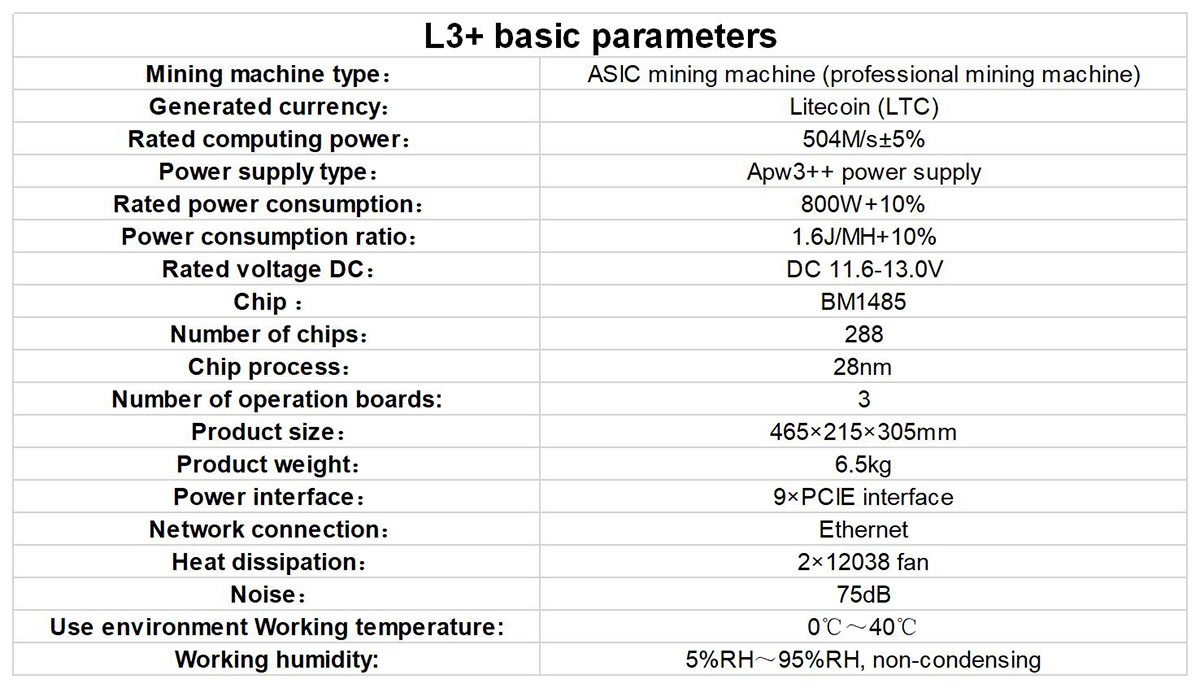 From the top of the miner, you can see that L3+ has four hashrate boards, each of which has three PCI-E6pin interfaces, and four data lines connecting the controller from the hashrate board. You can also see the interface of the control board.

From the front of the miner, you can see the configuration of the IP address feedback button, network cable interface, reset button and status indicator (also the Antminer L3+logo and qc label).

The official hashrate of Antminer L3+ is 504M. In the 24 hours of actual testing, the average actual hashrate is about 500M/S, which is similar to the nominal value.

The official standard power consumption of the Antminer L3+ is 800W, and the power in the actual test is 773W, which is similar to the official nominal value. 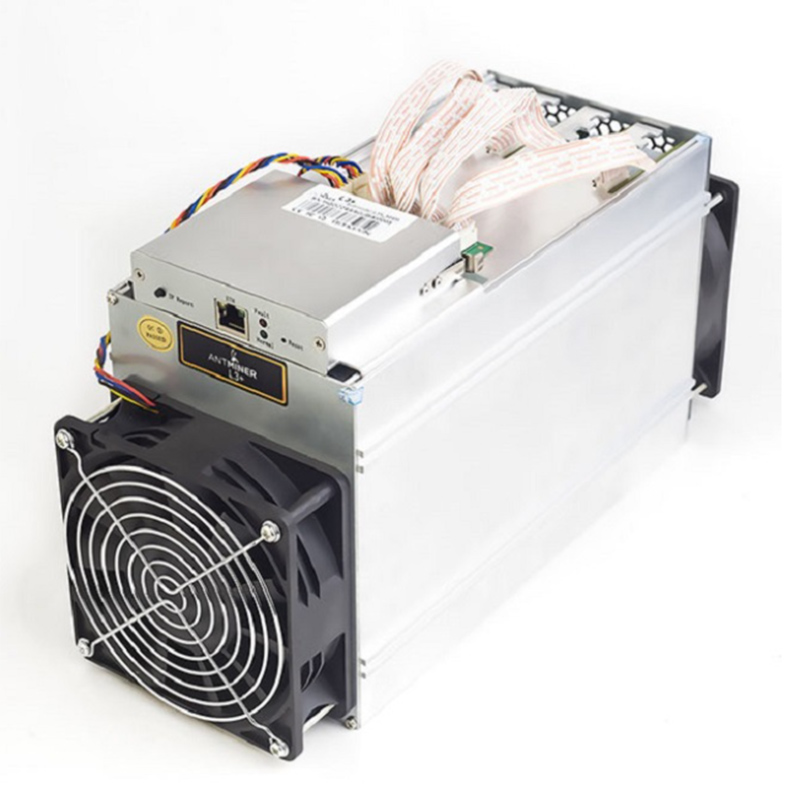 The overall performance of the Antminer L3+ is satisfactory, the power consumption per unit of computing power is as low as 1.53W/M, the computing power remains stable under long-term work, and the L3+ has low noise.

As long as the door is closed, the noise is basically inaudible.

Ant L3+ mining machine is packed in five-layer industrial carton, logistics and warehousing graphics, commodity barcodes, and brand logos are all available. The mining machine is designed with pearl cotton suspended in the air, which effectively guarantees the safety of transportation. A manual for the mining machine is attached with the box. The L3+ mining machine uses a front and rear dual cooling fan design, and an alloy shell, which is compact, sturdy and beautiful. There is a warning label on the side. 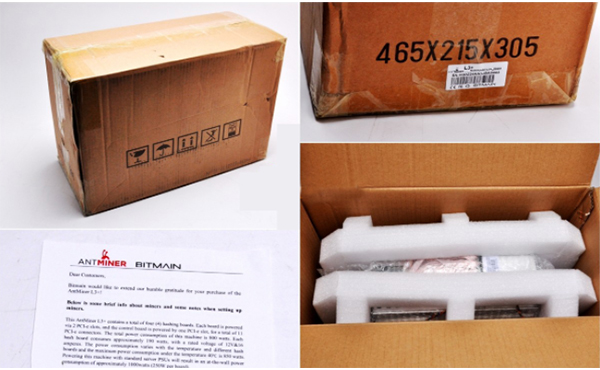 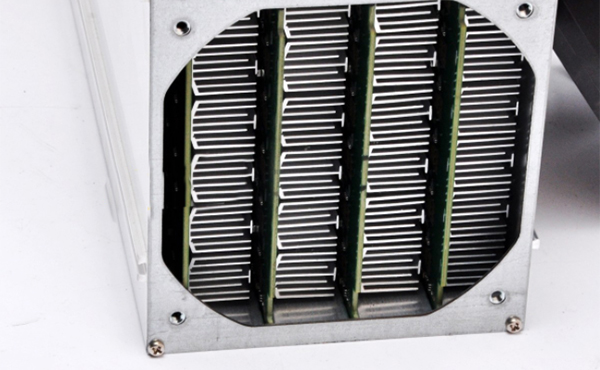 The data line interface adopts a buckle design, and the tight contact is conducive to the stability of data transmission.

• The front of the miner, the ip button, the network cable socket, the reset button and the status light (and the Antminer logo and qc label), and the front-mounted fan with a diameter of 12cm, air intake from this side.

• Behind the miner, you can see the cooling fan at the rear (the wind is coming out from this side).

• The chassis is the same as the s9. It is made of aluminum alloy and is integrally formed on all sides. The computing power board is inserted and fixed through the groove inside the chassis. It can be seen that each chip inside has an independent heat sink, and the overall structure is very compact.

L3+ miner needs to carefully check whether the heat sink has fallen off before installation.

First plug in the power cord to the hashrate board. There are two standard pci-E6pin interfaces on the four hashrate boards of the Antminer L3+ mining machine. 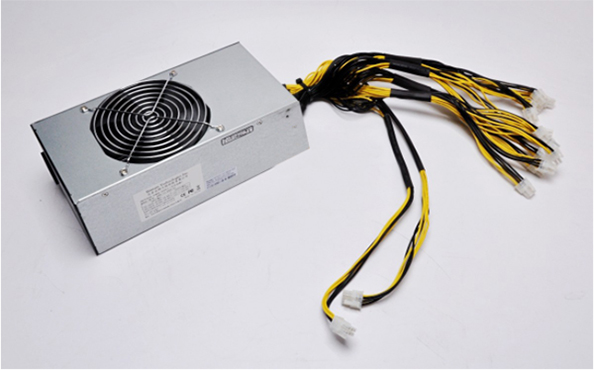 • Then plug in the internet cable.

• After the setting is completed, it will start running after about tens of seconds. The real-time status of the miner can be seen on the background page.

• The status light when the miner is running normally.

• The indoor noise in this test is about 38dBa, and the indoor temperature is about 20 degrees during the day and 16 degrees at night.

• The fan speed set by default is automatically adjusted according to the ambient temperature. When the miner is running normally, when the temperature is low at night, when the fan speed drops to about 2600 rpm, the miner measures about 66dBa at about 20cm.

• Overclocking test, the default frequency is 384, and the eight gears are raised to 406. The average computing power measured for a long time is between about 530.

• Mining machine overclocking idea: depending on the physique of the mining machine, each mining machine is slightly different, and each time it is upgraded two to three grades until stable operation.

• In terms of noise, when the miner is operating normally, the speed of the background fan during the day is about 3000 rpm, and the miner measures about 70dBa at about 20cm. 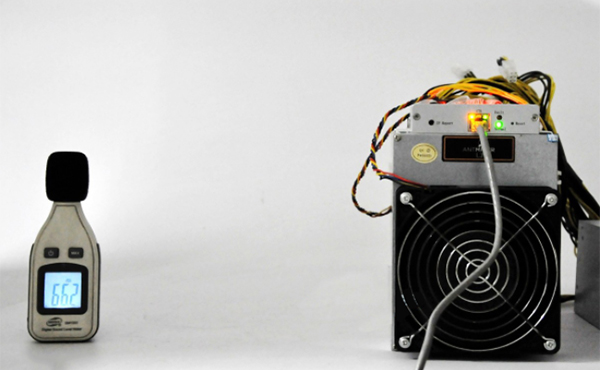 • is about 1 meter away from the miner, and the measured value is about 60dBa.

When the miner is just started or the settings are changed in the background, the fan will run at full speed for two to three seconds at this time, and the measured noise is about 79dBa.

• In terms of temperature, the background chip temperature is 51-58 degrees when the miner is running normally and stably.

• The air intake is measured at 20 degrees.

3. There is a certain overclocking space, and the measured stable overclocking is more than 4% (depending on the physique of each mining machine).

4. Applicable to all encrypted currencies using the Scrypt algorithm.

6. Good heat dissipation, dual-fan heat dissipation, the chip is only more than 50 degrees during operation, which is conducive to the stabi7. I hope that manufacturers can design a small Wright mining machine, so that more novices can experience mining.

Write your message here and send it to us